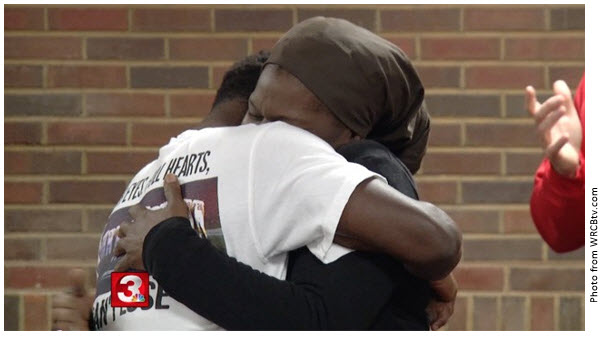 Last week we featured a story about Liliette Harris who lives in our Stratford House, in the Bronx, New York.  Her son, Adrian Harris, who is a senior in Baylor High School, Chattanooga, TN, had no idea that his football teammates’ parents had paid for his Mom to fly from the Bronx, NY to Chattanooga to see him. (read story)

Three years ago Liliette made the difficult decision to let her son move away from home to escape the rough neighborhood where he grew up.  And ever since Baylor High School senior Adrian has been studying far from home, Liliette Harris has never seen her son play football at Baylor. But that was all about to change. Unknown to Adrian, some of his teammates’ parents chipped in to pay for his Mom’s flight from the Bronx to Chattanooga where the school is located so she could visit her son and see him play. When Liliette arrived on the scene Adrian was eating dinner with his coach and teammates. Suddenly, in a room full of male voices with southern accents, Adrian was surprised to hear a woman’s voice call out in a New York accent, “Has anybody seen my boy?” When Adrian turned around, he was startled to see his Mom standing in the doorway of the dining hall.  Visibly moved, both mother and son embraced, and Liliette said, “I miss him so much, but I wasn’t expecting to see him so soon.  I’m so happy – I really appreciate it!” So the next time Adrian plays football, things will be a little different:  “I’m still going to go into the game with the same type of mentality, the same type of enthusiasm,” said Adrian, “But it’ll be a little bit more fun knowing my mom is in the crowd and knowing I’ll be able to play for her.”  Watch the encounter on WRCBTV.com.