A museum visit inspired by a lifelong passion 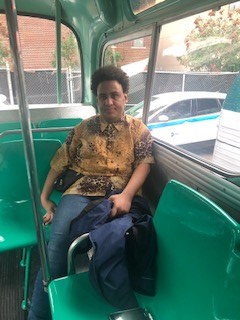 Henry has always loved buses. Ever since he was a small child, he enjoyed traveling on school buses and city buses throughout the city as a born and bred New Yorker. Recently, he had the opportunity to explore his passion for buses at the New York City Transit Museum Bus Festival in Brooklyn Bridge Park with Jonathon Kalik, an S:US Behavior Intervention Specialist who works with Henry. Last year, Henry attended the festival alone but this year he wanted to go with Jonathon. Together, they explored many old buses through the different decades of service which were used by the Metropolitan Transportation Authority to transport citizens and visitors throughout the five boroughs.

Henry is also an artist and loves to draw school buses in abstract designs which he has done for years. Even though he did not get to see any school buses at the festival, he was still excited to sit on buses and explore them from the 1960s, 1970s and 1980s. As a true native New Yorker, he will continue to draw buses but prefers to take the train or subway because “they are quicker and more reliable!”

S:US Developmental Disabilities Services serve approximately 800 individuals who have been diagnosed with an intellectual and/or developmental disability, as well as autism spectrum disorders and other psychiatric disorders. S:US is an integral part of the communities that host our programs and services in every borough of New York City.