The Lifeline that Shelter Gives Survivors of Domestic Violence: One Mother’s Story 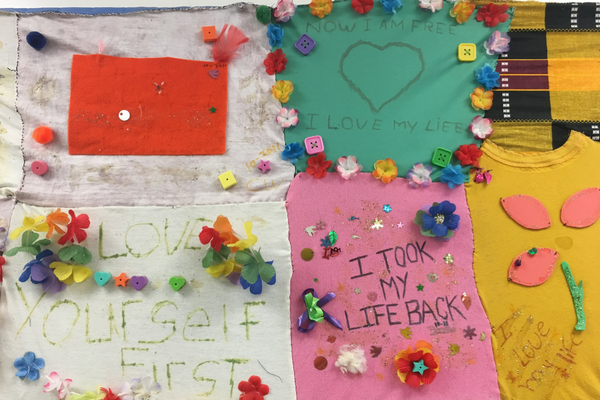 “I love myself. I trust myself. I believe in myself. I’m confident in myself. All things happen for my highest good. I’m moving forward.”

It had been three months since Isis* left her 23-year marriage. She repeated this affirmation to herself, as she did several times every day.

She remembered the night clearly. Her husband came home and began verbally abusing her, as he had done countless times over the course of their marriage. “My son was right in the middle of us,” Isis recalls. An argument ensued. “Something was just telling me, ‘You’ve had enough.’”

“When I saw blood coming out of my ear from him hitting me, I called the ambulance and they came and got me.” She insisted that her children come in the ambulance with her so she didn’t leave without them.

Later, with the help of a friend, she called New York City’s Domestic Violence Hotline and found a place in an emergency shelter a few days later. “I got in an Uber with my last bit of money and I left. I never looked back.”

This was Isis’ fourth attempt at leaving her husband, the culmination of years of emotional and physical abuse and control. In the past, she had left for a day, a week, or a month, and then returned. But this time was different. She knew it was the last time.

Living in the emergency shelter gave her the stability and space that she needed. She says it was like an awakening. “It’s like it was set up for me to find myself.”

Three months later, Isis hadn’t found housing yet and was about to reach the limit for staying at the emergency shelter. Without somewhere else to move with her sons, they would be homeless.

Tragically, for many survivors of domestic violence, on the other end of the courageous, often terrifying, step of leaving an abusive relationship is the possibility of homelessness. In fact, domestic violence is a leading cause of homelessness for women and their children, according to the National Network to End Domestic Violence. Housing services provide an essential lifeline for survivors and their children to find and maintain safety.

“The fact that survivors leave is the most courageous thing in the world,” says Deepali Patel, who works as a Licensed Mental Health Counselor at one of S:US’ two domestic violence shelters. “You are leaving your home and going into a shelter, or might not know where you’re going. A lot of people don’t know their options.”

When the staff asked Isis if she was interested in moving into S:US’ Athena House shelter for domestic violence survivors, her answer was immediate: “Yes, when should I leave?” As a Tier II shelter, Athena provides Isis and her sons a home for a longer period of time than the emergency shelter, as she continues looking for a permanent home of their own.

“A lot of people are quite shocked when they come here – it is not the stereotypical shelter that you may think of. It is very warm and inviting. Residents have their own apartments. It’s peaceful,” says Deepali.

“I remember the exact date when I moved in,” Isis recalls. “When I got here and I saw the space, it felt like the universe was helping me. I have my own room and my boys have their own room. I get to be by myself, I get to know myself.”

The personal space and time that Isis describes is a crucial part of the healing process for many survivors.

“Their time in shelter gives them time to think about what’s happened and what they want their future to be like. It’s a time to grieve,” explains Deepali. “In between the abuse, there was a relationship, and there is the loss of a relationship. Staying here is also time to focus on what they want in life and their own self-care.”

But Athena and other Tier II shelters also provide practical services to help residents get back on their feet and heal: referrals to individual and group therapy, childcare, help in setting up public assistance, assistance in finding permanent housing, and help in planning their own long-term goals.

“Even for those who are here for three or four months, you can see the change that happens. They have a place where people are supportive and warm, and where they can talk freely about things,” Deepali continues. “This is a place where a lot of healing happens.”

Isis is taking steps to complete her GED, which she wasn’t able to do during her marriage, and has her sights set on building her own quiet and peaceful home with her sons.

“I’ve gained a sense of self,” Isis confirms. True to her affirmation, she is moving forward.

*An alias is being used in this story to protect the confidentiality of the individual and her family.