Are Micro-Apartments A Good Solution To The Affordable-Housing Crisis? 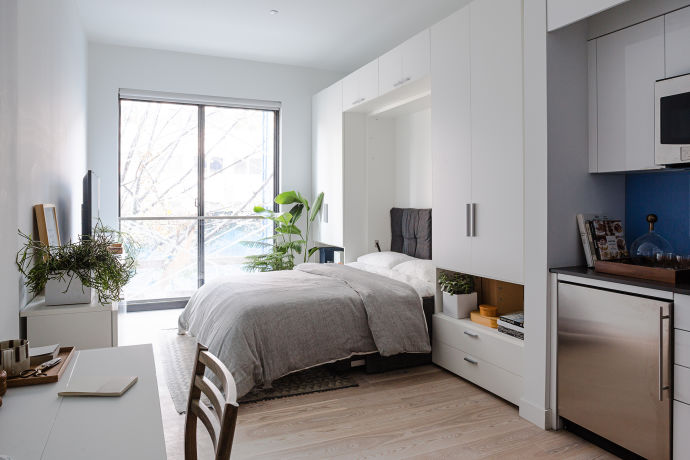 During a recent tour of Carmel Place, New York City’s new micro-apartment complex, Ammr Vandal, project manager for nArchitects, explained how design can generate a sense of roominess in even the smallest spaces. We were standing in the building’s three-hundred-and-two-square-foot second-floor model unit, one of its “mid-size” micros. The other apartments range from two hundred and sixty to three hundred and sixty square feet, all of them featuring a full bath and a compact but complete kitchen. High ceilings are essential, Vandal said, as is lots of natural light; every unit at Carmel Place, which is in midtown Manhattan’s Kips Bay neighborhood, has a large window that opens to a Juliet balcony. Vandal’s firm also designed the entry areas to be distinct from the living space. “How do you make something feel bigger? By making it smaller, by dividing it up,” she said. Even the light reflecting off the glass-tile backsplash in the kitchen was meant to play a part in extending the space.

The complex was conceived out of adAPT NYC, a design competition hosted in 2012 by then Mayor Michael Bloomberg. The aim was to pilot a new type of housing for the city’s growing number of small households. Micro-apartments and tricked-out tiny houses have become trendy elsewhere in the U.S., but Carmel Place has been controversial in advance of its opening this spring, partly because, in New York, small living quarters have historically gone hand-in-hand with substandard conditions. In 1987, the city passed a law forbidding the construction of apartments smaller than four hundred square feet, but Bloomberg waived the rule for Carmel Place’s fifty-five units, prompting criticism from those who feared that cramped quarters would once again become normal. “It’s important that it’s illegal to live in a place that small,” the writer Fran Lebowitz said, in a memorable rant at McNally Jackson Bookstore, in Soho, soon after the design competition launched. “It’s important because laws show the values of the country, of the city. So we say, we have a value: our value is that people shouldn’t live in a shoebox. It’s not good for human beings.” Historical examples to support her case abound. In New York during the nineteenth and early twentieth centuries, numerous immigrants squeezed into dark tenement buildings, and a family of four might have occupied only two hundred and fifty square feet. In the nineteen-seventies and eighties, single-room occupancies (or S.R.O.s), once a reputable form of accommodation for newcomers, became mismanaged and fell into varying degrees of squalor.

Enter Carmel Place, where everything seems to be stainless steel or glossy white. The unit that I toured was outfitted with custom-made furniture, including a knee-high coffee table that sweeps open to become a waist-high dining table, and a couch designed to collapse below a stylish Murphy bed. The furniture is part of what Tobias Oriwol, the project developer for the builder, Monadnock Development, highlighted as the complex’s “hotel-style experiences.” Also included are weekly cleaning and an app-based butler service called Ollie (short for “all-inclusive”), which can arrange pickup or delivery of dry cleaning and groceries.

The amenities may make Lebowitz’s concerns about the apartments’ confines seem rather misplaced—should we really get worked up about a small living space when it comes with a butler? The carefully managed, market-friendly optics at Carmel Place aren’t geared only toward relatively well-off renters, though. They’re part of a larger strategy by city officials to leverage the trendiness of tiny into a new affordable-housing model. In cities like Boston and Washington, “micro-luxury” developments, as we might call them, have typically been marketed to young, single professionals who want to live in the center of the city. But, like many new rental constructions in New York, Carmel Place will include designated affordable units—fourteen of them—which don’t come with Ollie or custom-built furniture. These apartments will rent for either nine hundred and fifty dollars or fourteen hundred and ninety dollars, depending on the renter’s income. By comparison, the market-rate units will rent for twenty-four hundred and forty dollars to twenty-nine hundred and ten dollars—which includes Ollie, Wi-fi, cable, and, in some cases, furniture. (These market-rate units boast some of the highest prices per square foot in Manhattan.) The building will also include eight Ollie-equipped, furnished units for homeless veterans, funded by Section 8 vouchers. That the other low-income units won’t have these luxury amenities lends some weight to Lebowitz’s critique.

It’s apparent that New Yorkers at the lower end of the income spectrum are in desperate need of affordable housing. According to the latest America’s Rental Housing report, which is published biannually by the Joint Center for Housing Studies of Harvard University, renters in the New York-Newark-Jersey City metro area increasingly suffer from disproportionally high housing costs. Nearly half of renters in these cities with annual salaries between forty-five thousand and seventy-five thousand dollars are “cost-burdened” (meaning they spend more than thirty per cent of their incomes on housing), as are three-quarters of renters who earn thirty thousand to forty-five thousand dollars annually. Similarly, a new study from the Brookings Institute on urban income inequality reports that income inequality has worsened in many cities over the past nine years, and that a relationship exists between inequality and housing affordability; the more unequal the city, the more expensive housing is for low-income families.

As a result, cities have been experimenting with less expensive micro-units. In Providence, architects have converted an empty mall into forty-eight micro-apartments that start at five hundred and fifty dollars a month. In Austin, a designer has come up with Kasita, a building of movable two-hundred-square-foot pods, which he envisions as a new type of affordable housing. New York City officials, too, emphasized affordability, not luxury, when they first pitched adAPT NYC. Robert Steele, the Deputy Mayor of Economic Development, called the project a “new model for development of affordable housing.” Bloomberg put it this way: “People from all over the world want to live in New York City, and we must develop a new, scalable housing model that is safe, affordable, and innovative to meet their needs.”

So why, then, did New York end up with a building oriented around micro-luxury, rather than going entirely micro-affordable? The question seems especially pertinent because the city donated the nearly five-thousand-square-foot parcel of land on which Carmel Place sits. I asked Ingrid Gould Ellen, the director of the Furman Center for Real Estate and Urban Policy at New York University, to offer some insight into the city’s approach. While micro-apartments are “a potentially important source of dedicated affordable housing,” Ellen told me, “you could make an argument not to start there.” She cited the early backlash against the idea, and the city’s history with S.R.O.s, in which a safe option gradually became a symbol of urban blight. “The S.R.O. model became stigmatized,” she said. “If micro-units become a form of low-income housing only, it becomes stigmatized.” In other words, going that route might have risked damaging the micro brand among those who seek both market-rate and low-income housing. The observation subtly underscored the importance of optics when it comes to small apartments. An affordable “shoebox,” as it were, was much more likely to be controversial than an expensive one.

In theory, the tension between low-income and high-end micro-units could be resolved by design. Both the luxury and the affordable-housing apartments at Carmel seem, at first glance, to be united by the idea that, in a city where space is extremely limited, proper design intervention can, like magic, create new space. The thought is seductive. In the model unit, every corner has been trimmed of excess, and the living spaces do feel larger and airier than their square footage suggests. But the luxury extras complicate the equation. As I toured the model unit, the futuristic furniture seemed less like a high-end indulgence and more like an essential ingredient. Moreover, despite the design elements and amenities, the model units seemed best-suited to young singles who work long hours and have the means to eat and socialize outside of their homes, or to professionals with houses outside the city who need a place in town a few nights a week. But what about inhabitants who can’t afford to make the city an extension of their living space? “We don’t know the answer to that question,” Ellen told me, before adding, “I don’t think there is any evidence out there that people are harmed living in spaces smaller than four hundred square feet.”

There are also questions about whether such apartments are a sound approach to addressing the affordability crisis. “It might not really work,” Alan Berube, Deputy Director and Senior Fellow at Brookings, told me. Low-income renters are most often families with children who need larger apartments,” he said, adding, “More supply is better, but we shouldn’t kid ourselves that micro-apartments alleviate the burdens low-income renters are facing.”

In New York, officials see it differently. “We have more seniors and single-person households than at any time in our history, which is why we are taking a hard look at offering more flexibility in the size of affordable housing that is built,” Melissa Grace, the spokesperson for the Department of Housing and Preservation, wrote in an e-mail. Last fall, the city introduced new zoning regulations that would, among other things, remove the four-hundred-square-foot minimum. The measures, which will come before the City Council in March, would retain density regulations that prevent another entire building of micro-units, but would lay groundwork for micro-apartments to be incorporated into market-rate and low-income multi-family buildings.

The demand appears to be there. To determine who gets Carmel Place’s fourteen subsidized units, the city held a lottery in the fall. Over the past few years, such lotteries have seen record application numbers. In 2014, nearly fifty-nine thousand people applied for a hundred and five low-income apartments in Greenpoint, Brooklyn, and nearly ninety-three thousand people entered a lottery for nine hundred and twenty-five middle-income units at Hunter’s Point South, in Queens. People didn’t seem to be dissuaded by Carmel Place’s comparably small apartments—sixty thousand people applied. In a city where many pay half of their income or more on rent, about a thousand dollars a month for a brand-new room of one’s own—or a shoebox of one’s own, as Fran Lebowitz might put it—seems, on its face, like a phenomenal deal. A few tenants will soon find out whether that’s the case.