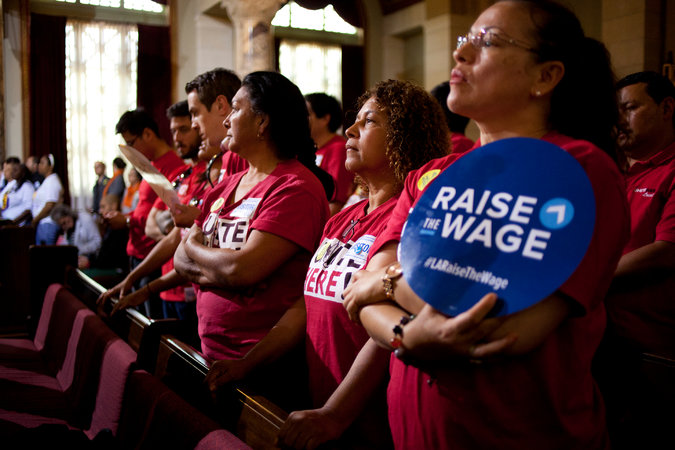 LOS ANGELES — California lawmakers have reached a tentative deal to raise the state minimum wage to $15 an hour by 2022, potentially signaling the biggest advance yet in a campaign to increase pay for low-income workers that has reverberated in the Democratic presidential contest and in cities across the country.

If approved, California would become the first state to adopt a $15 an hour minimum wage. A measure to impose a $15 statewide minimum wage in New York is under negotiation in Albany.

Under the tentative California deal — which could be announced as soon as Monday — the wage, which was raised to $10 an hour on Jan. 1, would increase incrementally to $15 over the next six years. Small businesses would have an extra year to comply.

Advocates for the higher wage hailed the California legislation, describing it as a major victory that would propel similar efforts nationally.

“This is a very big deal,” said Paul K. Sonn, the general counsel to the National Employment Law Project, a national research and advocacy group on wages. “It would mean a raise for one of every three workers in the state.”

The movement has gained traction in a dozen cities, including Los Angeles, San Francisco and Seattle. Last week, the mayor of Washington proposed raising the minimum wage to $15 by 2020.

In New York, Gov. Andrew M. Cuomo is pushing for a $15 minimum wage in New York City by the beginning of 2019 and statewide by July 2021. Mr. Cuomo, a Democrat who has previously raised wages to $15 for state workers and fast-food employees, was attempting to broker a deal with the State Senate, which is led by Republicans who remain wary of the potential economic effect of the wage, particularly in long-suffering areas upstate.

Gov. Jerry Brown of California, a Democrat, backed raising the minimum wage in 2013, when legislation passed increasing it to $10. He has since resisted efforts to raise it again, expressing concern that another increase could cost the state billions of dollars of wages and hurt the state’s business climate.

The deal was outlined on Sunday by officials who had been briefed on the legislation and who requested anonymity to discuss a measure that had not yet been announced. Mr. Brown’s office did not immediately respond to requests for comment. Aides to lawmakers involved in the effort said they could not comment until a final deal was announced.

The tentative deal came after union leaders moved to take the issue to voters this November. An initiative to raise the minimum wage to $15 an hour by 2021, which would peg future increases to inflation, qualified for the ballot last week. Union leaders have the authority to withdraw the initiative, presuming they are satisfied with the new legislation.

“If a California minimum wage bill passes and is signed into law by the governor, we will take a careful look at it, and our executive board will decide what to do with our ballot initiative,” said Steve Trossman, a spokesman for the Service Employees International Union-United Healthcare Workers West.

The ultimate sweep of any New York legislation remains unclear. But Mr. Sonn said that if both these states act, as appears likely, it would have a dramatic effect, given their size.

“The scale of having both New York and California would reverse years of falling wages and result in very substantial wage growth for workers at the bottom,” he said.