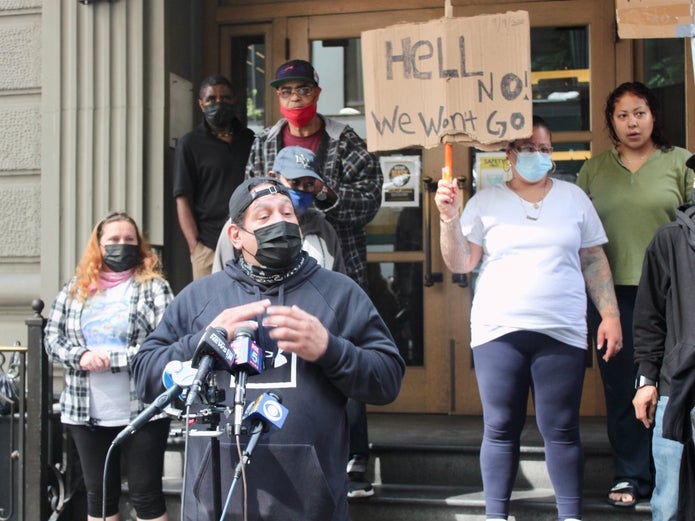 MIDTOWN MANHATTAN, NY — After weeks of indecision, the city reversed course Friday on its plans to transfer dozens of homeless families from the Harmonia shelter in Midtown to make way for men being evicted from the Lucerne Hotel on the Upper West Side, residents and advocates said.

The news came just hours after Harmonia residents pleaded with Mayor Bill de Blasio in a news conference outside the East 31st Street shelter to make a decision about the transfers, saying two weeks without news from the city had left them on edge and taken a toll on their mental health.

“We fought a good fight. We got things done by raising our voices and being heard,” said Mike Bonano, who took on a leadership role among shelter residents in recent weeks, using a rented truck to secure food donations and help other families prepare to move out.

“I became a public advocate overnight — it feels good to know I actually helped somebody,” he said Friday.

City councilmember Keith Powers, who represents Midtown, said representatives from the Department of Homeless Services told him hours after the press conference that the transfers would be canceled.

“The last few weeks have been frustrating and disheartening as we’ve played politics with people’s lives, but today’s announcement is some relief to folks at the Harmonia,” Powers told Patch. 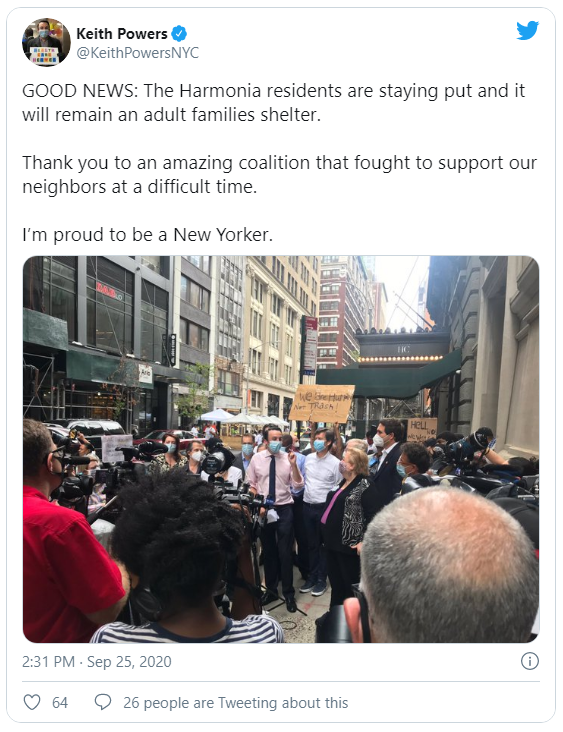 About 150 families at the Harmonia found out abruptly Sept. 10 that they would be evicted. The city put the transfers on pause days later, facing intense criticism and the threat of a lawsuit from the Legal Aid Society, but had been largely silent since then about the fate of those left inside the Harmonia, many of whom have significant disabilities.

The city is moving forward, however, with plans to evict nearly 300 men from the Lucerne, a hotel that was converted into a temporary shelter to relieve crowding in congregate shelters during the pandemic. A group of Upper West Side residents mounted a fierce, well-funded campaign to boot the Lucerne residents from the neighborhood, threatening to sue the city if no action was taken.

The Lucerne residents will be moved to a different shelter that will allow them to continue to socially distance and receive health services, a Legal Aid Society spokesperson said. It was not immediately clear where that shelter is, or when the men would be moved there.

It was also unclear how Friday’s news would affect the 41 employees at the Harmonia, who were told Sept. 10 that they would lose their jobs if the transfers went through, before getting a temporary reprieve when the moves were paused.

Some Harmonia workers have quit their jobs anyway, amid uncertainty about whether their employer, Services for the Underserved, would be able to find new placements for them. Shannon Luchs, a senior case manager at the Harmonia since its inception more than two years ago, said she is among them.

“While I do not want to leave Harmonia, I believe I have no other choice but to look for work that brings me security and stability,” she said Friday. Even if the city canceled the transfers, Luchs said she worries that the shelter will have lost too many workers to be able to care for residents effectively.

The Department of Homeless Services did not immediately respond to a request for comment.

Harmonia Homeless Shelter Residents Will Not Be Transferred Out, City Says (CBS NY)