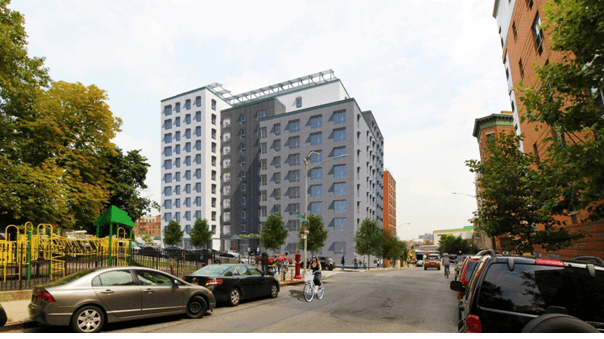 On March 9, Community Board 3 gave its stamp of approval to turn an underutilized NYCHA waste facility in the south Bronx into nearly 200 units of supportive and affordable housing.

The property, dubbed Melrose North, is being developed by the New York City Housing Authority (NYCHA), the New York City Department of Housing Preservation and Development (HPD) and the Housing Development Corporation (HDC) and will create 171 units of supportive and affordable housing in Morrisania. Construction began in January.

The site is located at 925 Courtlandt Ave. between East 162nd Street and East 163rd Street, a vacant lot that housed a trash compactor.

The supportive housing units will be set aside for individuals and families that are homeless, victims of domestic violence or suffering from substance abuse or mental health disorders. NYCHA residents will be given preference for 17 of the units.

“During the year of the pandemic one of the things we have seen a rise in our community has been domestic violence in a manner we have not seen before,” Rivera said.

However, not all of the board members were in favor of the housing. Olympia Jay Striplin feels this will oversaturate an already overcrowded area that has little to no parking

“Why don’t they build condominiums here?” he asked. “We continue to allow these projects to be dumped into our communities.”

Amenities for this project include community and computer rooms, an outdoor gym, laundry rooms, a play area, a community garden and a sun terrace on the 11th floor.

Services for the UnderServed (S:US) social services will be housed on the ground floor of the building and offer supportive services to residents. Additionally, Melrose North will feature approximately 5,000 square feet of community facility space to be used as a youth arts education facility operated by the DreamYard Project. Bronx Pro Group and S:US will work closely with BronxWorks to train NYCHA residents in relevant construction skills and hire them throughout the construction process.

Lastly, a new permanent waste facility for the Morrisania Air Rights NYCHA development will be built on the ground floor of the development to replace the current waste one on the project site.

Occupancy is expected by 2024.