Creativity, Autism And ADHD–Why We Should All Embrace Neurodiversity

The creative industries will miss out if they don’t embrace different minds, says Neil Ayres. To mark World Autism Awareness Week, he talks to a group of artists and designers – including Alan Gardner, The Autistic Gardener – about the advantages that neurodiversity can bring. 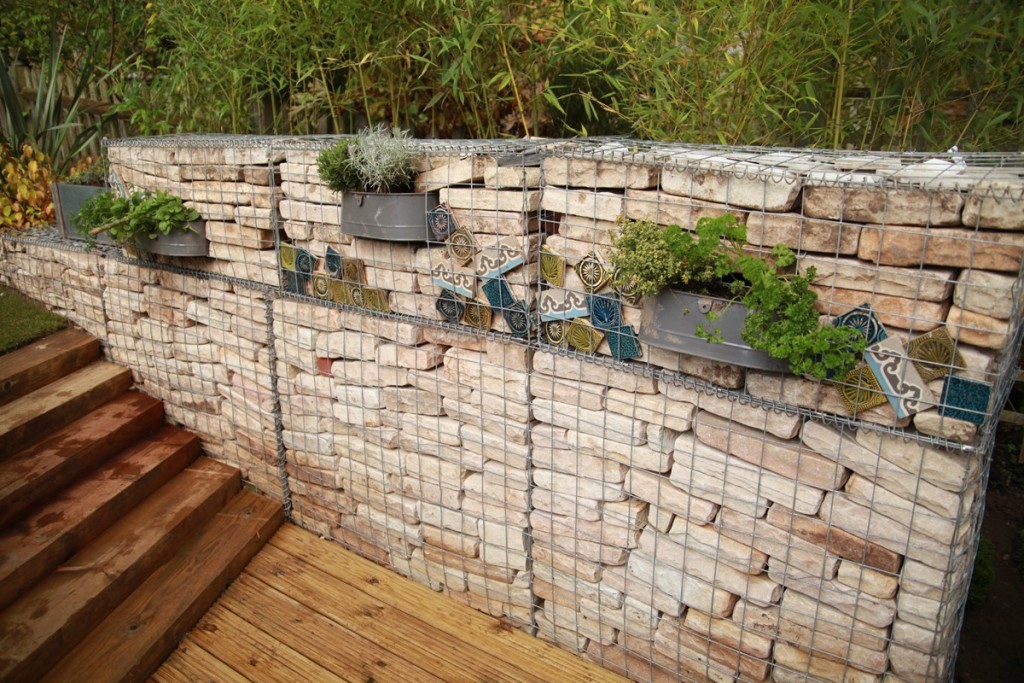 As far as I’m aware, my aunt is the only ambidextrous (or ‘mixed-handed’) person that I know. But she wasn’t born this way. Like me, she’s left-handed, only her school found that a bit devilish so they forced her to use her right instead. Unlike those in times gone past, I can’t say I’ve ever felt disadvantaged or judged for being left-handed. I mention ‘handedness’ though to cut off any inclination you might have to dismiss the general premise here, which is that – like handedness – cognitive conditions such as autism, ADHD and dyslexia are real and point to neurological differences between those with them and the ‘neurotypical’. Most people’s exposure to these conditions is couched in language that focuses on deficits, and whilst it’s true that some shared traits – difficulty in filtering information or a shortfall in working memory for instance – can make certain aspects of life more challenging than for most, what’s often overlooked are the advantages that a different way of experiencing the world can bring, especially in the creative sphere. The term ‘neurodiversity’, which has grown in popularity from its beginnings as one favoured by a group of autistic self-advocates, posits that diverse neurological conditions are a result of normal human genetic variations. This challenges the (medically-led) view of neurological difference as pathological. This seems very sensible, given that those with neurodivergent conditions (or ‘neurominorities’, if you like) make up a fairly substantial segment of humanity. It’s estimated, for instance, that one per cent of the UK population is autistic. That’s about 700,000 people, equivalent to the entire population of Luxembourg. Extrapolate that out and you’ll find there are likely more autistic people in the world than there are British. To mark World Autism Awareness Week I want to share with you some individual stories about the advantages that embracing neurodiversity can bring. 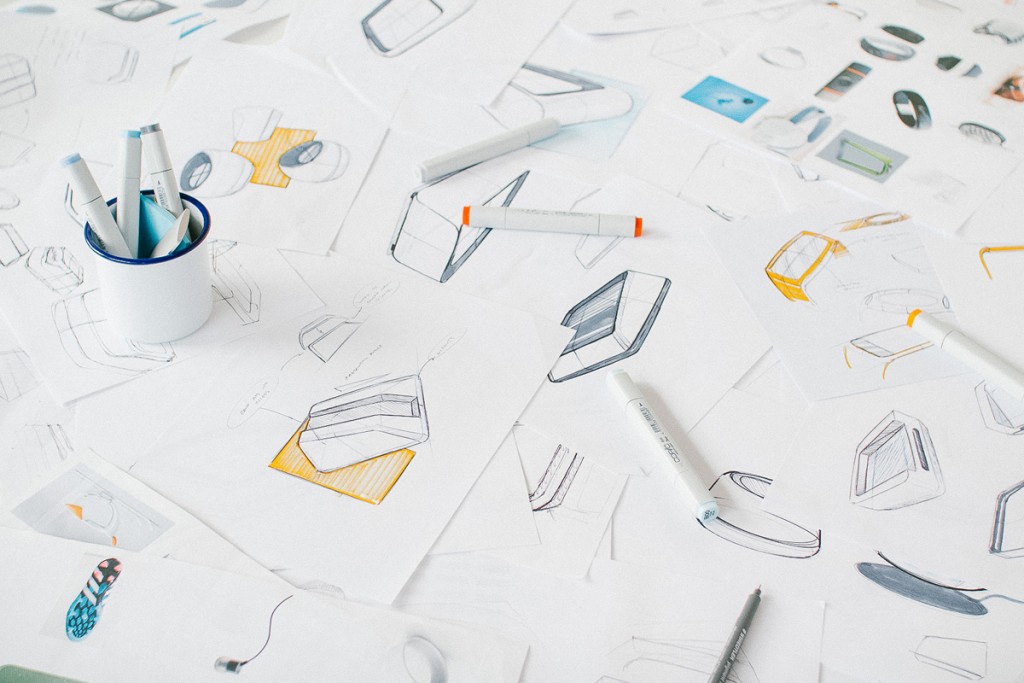 Rob Bye is a 25-year-old designer who 18 months ago co-founded Morrama, a product design studio specialising in working with startups and innovation programmes for companies like Pernod Ricard and Homeserve. Like many designers, Bye is also dyslexic, although this wasn’t recognised officially until he hit university. “I went to a high-performing grammar school,” he says, “and was the first person in about ten years to not take an additional language, but I had to fight hard for the school to agree to this. It was challenging enough to get through English, without throwing French and German at me.” Like many successful business people with a marked neurological difference, the downsides of Bye’s dyslexia have been offset by his inherent intelligence and determination, as well as some self-supporting structures that he’s learned over time. Having now manoeuvred into a position that plays to his strengths, he’s thriving, and so is his business. 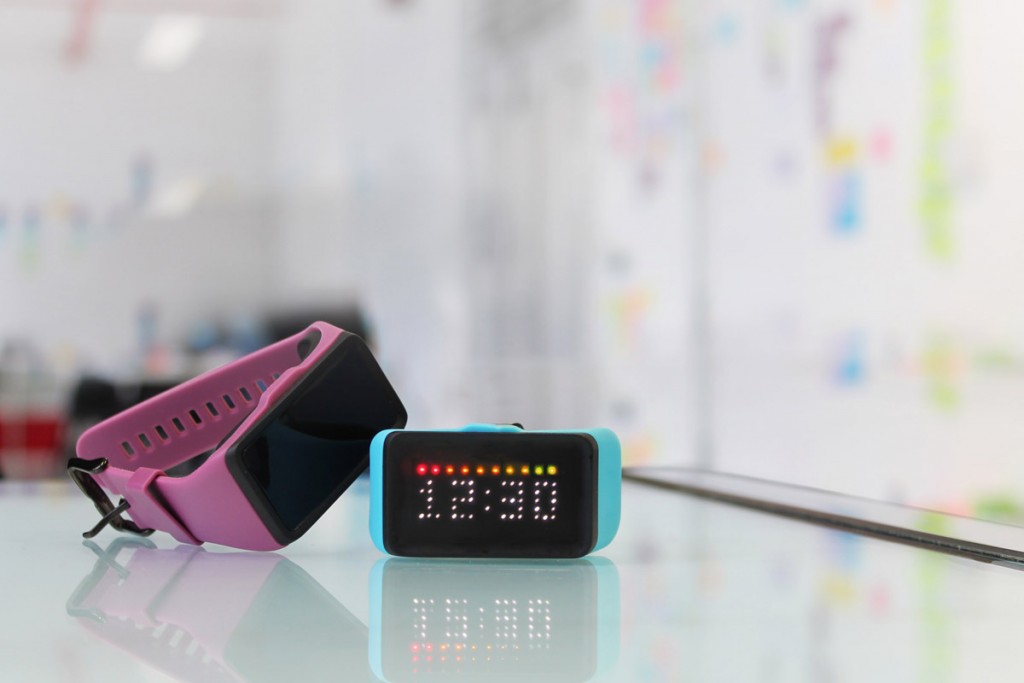 [Morrama-designed wearables to encourage children to get active]

Bye’s partner at Morrama is fellow designer Jo Barnard. She says that over the years she’s worked with him, she’s learned to trust his rapid visual problem-solving, even if he’s not always able to express how he arrives at a solution, and the two make a formidable team.Bye freely admits he struggles with things like formal documentation or following speeches, but Barnard and the rest of the team are able to more than compensate for this. When it comes to visual problem-solving, listening to Bye you could argue those around him who aren’t dyslexic are ‘learning disabled’.“At uni I partnered with another dyslexic designer,” says Bye, “and we worked at a much faster rate than the other students, and were far more productive.”These same frustrations concerning speed, intuitive problem-solving and big-picture thinking can be similar for those with ADHD.It’s commonly perceived that people with ADHD have problems with attention and concentration, but often it can be a case the person with ADHD’s brain has sped ahead of the group. By the time everyone catches up and reaches a conclusion they’ve already arrived at, a speedy brain might have become distracted or bored and lost interest.ADHD is a condition of extremes. A little known fact amongst those unaffected is that, as with autism, those with ADHD often possess the ability to ‘hyperfocus’ on a subject or interest. Sometimes this comes at an expense to other things in their lives, which in cases of drug or gambling addictions can be incredibly damaging, but it’s also a talent that can be successfully applied to professional interests.Ashten Winger, also known as Whoopi, is an LA-based multimedia designer for a major social media platform. He also has ADHD, which he was diagnosed with when he was eleven. He believes ADHD has a direct impact on both his creative process and as a result his approach to work. He designed the visual effects on the video for The Internet track, Girl (still and film shown, below). 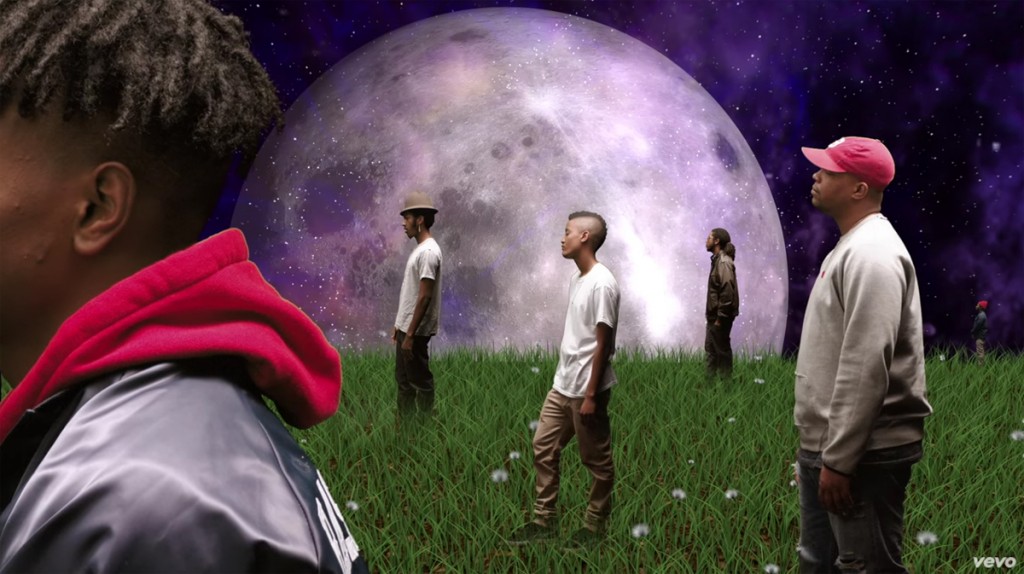 http://youtu.be/zmY8mG4_3j4“Because I’m constantly losing focus, I sometimes have to revisit ideas three or four times before I can move on,” says Winger. “I like to think that there are always positives to balance out the downsides though. As much as I would love to be able to sit down and get myself to complete a task exactly as I plan to, the breaks that I get from being distracted sometimes help me gain new perspective on an assignment or creative project.” 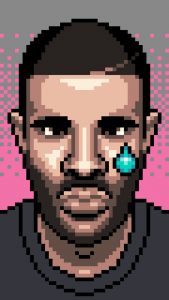 [Winger designed and developed Drizzy Tearz, a popular casual gaming app with the object of catching rapper Drake’s tears before they hit the bottom of the screen]Like Bye, Winger doesn’t expect special treatment from others due to his cognitive differences, but values a mutual understanding between himself and others. “Despite the way it may look at times,” he says, “I am actually capable of meeting deadlines.” 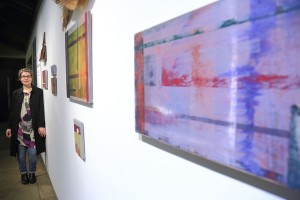 Sonia Boué at the Brain Dancing group show, held at Oxford’s North Wall Arts Centre and hosted by Autism Family Support Oxfordshire. Photo: Stu Allsopp]Sonia Boué is a multi-form visual artist, known for her work on the Spanish Civil War (she recently worked with Tate on a film about war artist Felicia Brown). She only recently had confirmed what she has suspected for some time that she’s autistic.

Boué has chosen to be open about her condition because, as well as wanting to draw attention to the innate creative worldview autistic people possess, she feels things need to improve. 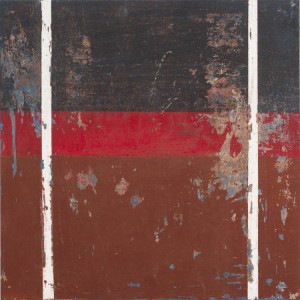 “As a profession, the art world is dependent on conforming to a process of study, which can be quite brutal,” she says. This is difficult for autistic artists who may prefer to self-teach.

“You can’t expect systems to change when the people steering them don’t know that change is needed. Many assumptions are so embedded… I know that it is hard to be out but I do think it helps. It helps to be out and be assertive about what is wrong currently.” 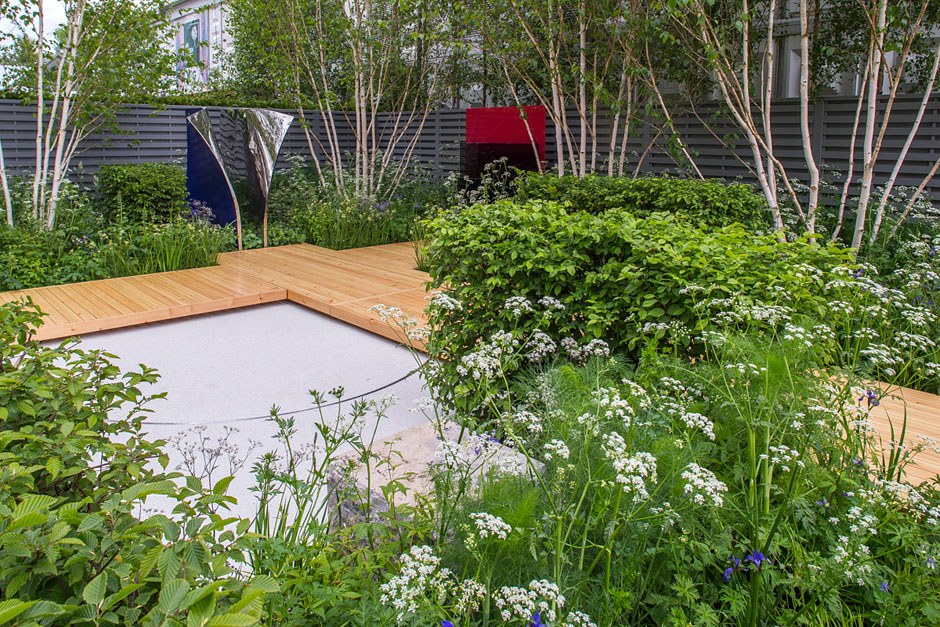 [Alan Gardner’s show garden for Viking Cruise Ships, which earned a Silver at last year’s Chelsea Flower Show. Shown at top of post is a wall of caged bricks, created by the team he mentored as part of The Autistic Gardner, his Channel 4 makeover show]

Perhaps the person to most embody this spirit of asserting the positives of thinking differently is Alan Gardner aka The Autistic Gardener. Gardner has created more than 40 RHS show gardens as well as presenting his own television series for Channel 4. Since being diagnosed with Aspergers three years ago, he’s become one of the UK’s loudest voices for awareness and appreciation of the strengths neurodiversity brings.“I think autism informs my creativity 100 per cent,” he says. “My thinking is completely visual. I think in patterns and pictures – in landscapes, and visualise everything in absolute detail before I experience it.”In the same way that his television show (and especially his witty voiceover) subverted the tropes of a conventional makeover programme, Gardner subverts the stereotypical ‘Rainman’ view of autism. He’s adventurous, charismatic and eloquent, and describes his take on life as never having got beyond that of an over-excited ten-year-old.Although he feels that awareness is important, like Bye and Winger he doesn’t see his condition as an excuse for not engaging with the mainstream, but he’s passionate too that some things work against autistic people.“What’s missing is opportunity,” he says. And as a father that’s a substantial frustration. Gardner’s children, all three of whom are highly creative, are themselves currently going through the autism assessment process, which their father feels will be a formality. “My son Haydn had crippling anxiety at university, commuting two hours every day from Birmingham to Coventry, but his tenacity was greater.”The younger Gardner studied fine art and illustration. Talking to him, it’s impressive to learn how he both channelled his anxiety into his art, and also how he took control of it via the act of creation. Since graduating, he’s had some success with private sales, but is keen to break into more commercial work. 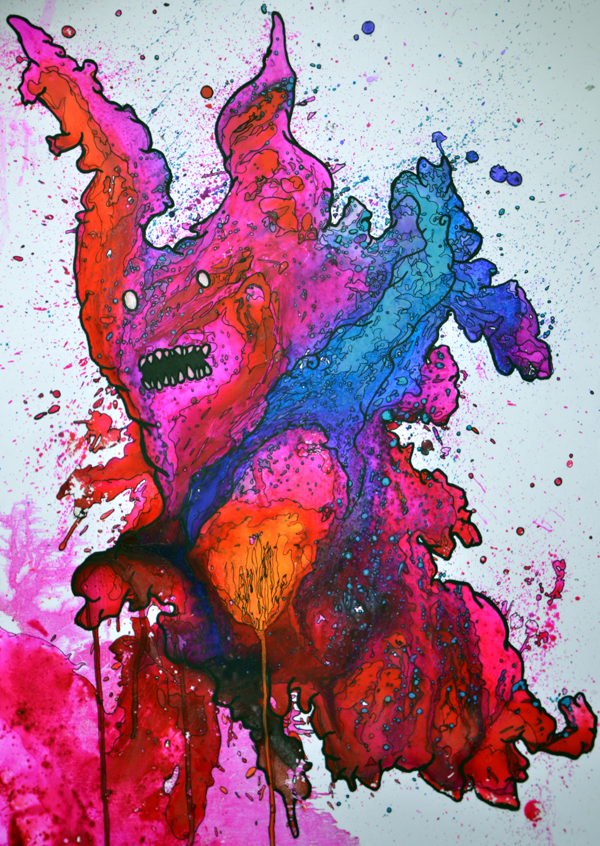 However challenging this might be, like his father, Haydn at least has the option of working for himself.

It will be harder for his brother, Reiss, although it shouldn’t be.“Reiss is a talented fashion designer,” says his father. “He could easily be a media costumier at the BBC, for instance, and has the will and the drive to do it.” Due to barriers encountered in the admin-heavy hiring processes of the professional world however, Reiss recently applied for a job with TK Maxx. “To me, that’s like putting David Bailey to work behind the counter in a camera shop. There’s little chance for those who struggle with the intricacies of paperwork and formal interviews. I’m fortunate nowadays that I can pay someone to do that stuff for me. That’s a luxury not many people have.” 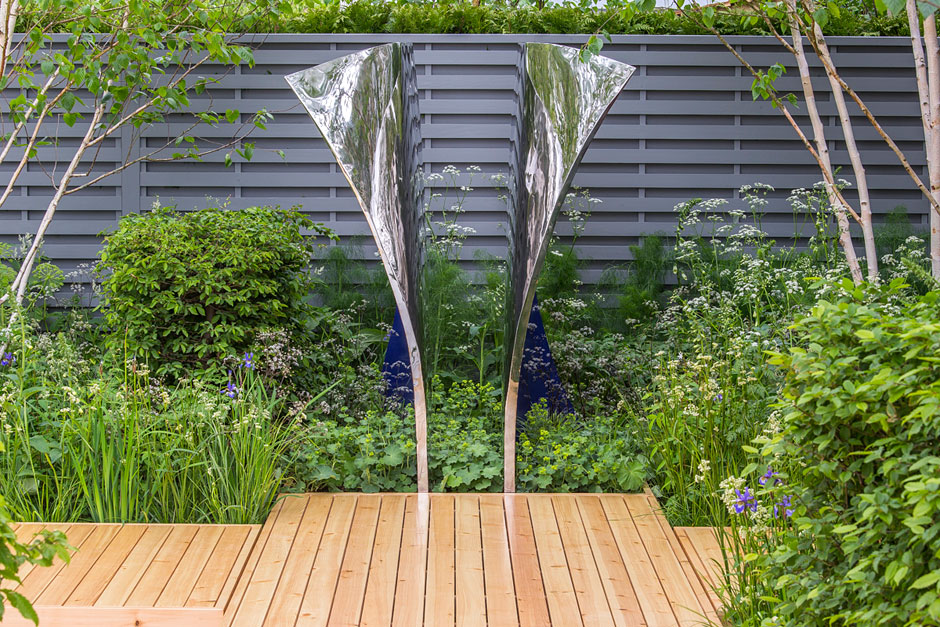 It’s clear that if professional creativity continues to emulate corporate business, it will miss out more and more on a massive pool of incredible creative talent. When Alan Gardner opened his TV series by stating boldly that “I’m autistic” it was a powerful thing, but it’s hard to be open about something if you feel you’ll be judged for it. We need to stop forcing people to use their other hands, hiding their true selves.

Some of us, through luck or judgement, are for the most part able to harness the positives of our differences and cope with the more challenging aspects as best we can. For many, many others, prejudice, herd mentality and an aversion to difference mean people experience a much harder and less fulfilling life than they deserve, marred by mental health issues not due to their conditions but by the reactions of others to them.Doesn’t it make sense for an industry intended to provide spontaneity, creativity and visual communication to embrace minds built for spontaneity, creativity and visual communication?