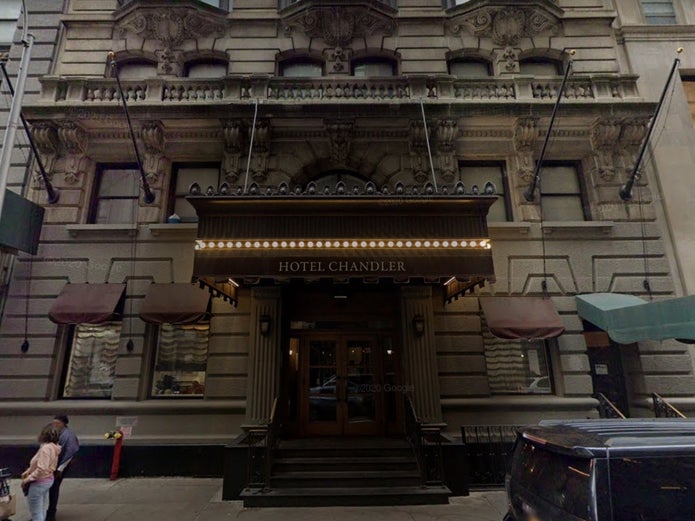 Judith Jackson, S:US’ Chief of Staff, spoke with Nick Garber, a Patch reporter. Ms. Jackson discussed how S:US was advised by the City that the homeless men at a hotel in the Upper West Side would be relocated to its Harmonia family shelter (formerly Hotel Chandler) on E. 31st Street in Manhattan.

MIDTOWN MANHATTAN, NY — At least 150 homeless families will be displaced from a Midtown shelter to make room for men being moved out of the Lucerne Hotel on the Upper West Side, shelter staff said Thursday, as a group of elected officials condemned the city’s decision to “evict these families with only a few days’ notice.”

The 150 adult families, amounting to 338 people, are set to be moved from the Harmonia shelter on East 31st Street, formerly the site of the Chandler Hotel, Judith Jackson, chief of staff at shelter provider Services for the UnderServed, told Patch. Of those 338, about half have severe health issues.

Jackson said 12 families had already been moved to other shelters by Thursday afternoon. The rest of the transfers have been halted until at least Friday, after advocates pointed out that the city is required to provide 48 hours notice.

One of those affected is Al Williams, who lives at the Harmonia with his partner and told Patch Thursday that he overheard shelter workers the previous day discussing the imminent transfers in the building’s lobby. When he asked the workers if his name was on the list of residents set to be moved, they told him it was.

Williams sensed a dark logic behind the transfers: Midtown lacks the tight community bonds present on the Upper West Side, where residents for weeks have fiercely opposed the placement of about 300 homeless men in the neighborhood as part of an effort to reduce crowding in shelters during the coronavirus pandemic.

“There’s no community that’s going to fight it as they did up on the West Side,” Williams said.

Jackson said her organization had received notices of administrative transfer Wednesday from the Department of Homeless Services to pass on to residents, but that the notices lacked any information about where or when they would be moved.

And Williams said he still hadn’t gotten any formal notice about the transfers by Thursday afternoon, as uncertainty abounds among residents.

Shelter residents aren’t the only ones affected: 41 employees of Services for the Underserved lost their jobs “overnight” as a result of the transfers, Jackson said.

Mayor Bill de Blasio was behind the decision, announced abruptly Tuesday evening, to move the men out of the Lucerne. The city was facing a possible lawsuit from residents of the affluent neighborhood who said their quality of life had been diminished since the men arrived.

But the move has been blasted by other officials, including Councilmember Helen Rosenthal, who represents the Upper West Side. A group of Midtown officials, including State Sen. Liz Krueger, City Councilmember Keith Powers, Assemblyman Dick Gottfried and Borough President Gale Brewer, issued a joint statement Thursday saying they were “deeply disturbed that the Mayor is caving to political pressure” by closing the temporary shelter.

The officials said they would welcome the men being moved to the Harmonia, but worried that the families being displaced would be deprived of essential services.

“The Harmonia is a uniquely specialized facility serving a vulnerable population that includes many people with disabilities, including physical and mental health challenges,” they wrote. 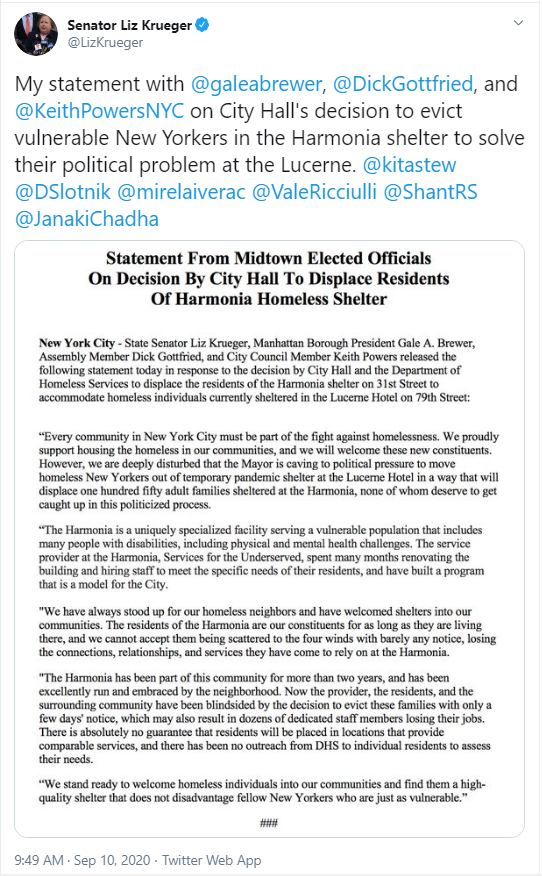 “The service provider at the Harmonia, Services for the UnderServed, spent many months renovating the building and hiring staff to meet the specific needs of their residents, and have built a program that is a model for the City.”

Jackson also called the transfers disturbing, especially due to the lack of notice by the city.

“It’s difficult for us to be navigating this situation, having it come down on us so suddenly,” she said.

Attorneys with the Legal Aid Society, who had been advocating on behalf of the men housed at the Lucerne, said Thursday afternoon that they would file a lawsuit against the city over its plan to move residents from the Harmonia.

The DHS did not return a request for comment.

The Fight Over the UWS Homeless Hotel Might Not Be Over

Shelter residents dig in after being given hours to leave, make way for displaced men from UWS hotel

N.Y. Will Move Homeless Men From Liberal Neighborhood After Backlash

“Domino Displacement”: How Homeless Families All Over NYC Could Be Uprooted By Upper West Side Fiasco