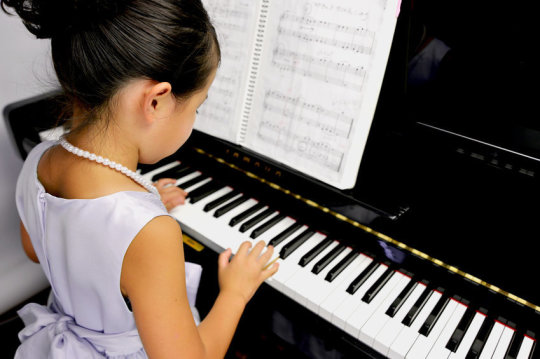 In a new book, Ruthsatz and a co-author explain how what she has learned about child prodigies may help us not only understand autism, but could point the way to new treatments.
Credit: © mtaira / Fotolia

Scientists may learn a lot about autism from studying a group of people who don’t have the disorder.

Joanne Ruthsatz, assistant professor of psychology at The Ohio State University at Mansfield, is one of the first researchers to have uncovered the link between prodigy and autism.

In a new book, Ruthsatz and a co-author explain how what she has learned about child prodigies may help us not only understand autism, but could point the way to new treatments.

“Our evidence suggests that prodigies are people who should have autism, but don’t. They share many of the same characteristics of people with autism, but not the deficits,” she said.

“We believe that, for prodigies, there is a resilience gene or genes that are holding back the deficits associated with autism and allowing the talent to shine through.”

Ruthsatz discusses her research in the book The Prodigy’s Cousin: The Family Link between Autism and Extraordinary Talent, written with her daughter, journalist Kimberly Stephens.

The book highlights Ruthsatz’s 18 years of research on prodigies, which led to her discovery of a family link to autism. The first prodigy she studied, in 1998, had a cousin with autism.

She has now studied more than 30 prodigies — the largest research sample of these rare individuals every created. She has found that more than half of them have a close relative with autism. Some of them have several relatives affected by autism.

“We’ve learned this isn’t a coincidence. These prodigies and their relatives with autism have a genetic link in common,” she said.

In a study published last year, Ruthsatz and her colleagues discovered a mutation on chromosome 1 that prodigies share with their relatives with autism, but not with their other relatives.

“It’s a fascinating link, but it is just the beginning of the genetic research,” she said. “I am very excited about what the DNA studies are going to tell us.”

Ruthsatz is working with a research team from McGill University in Canada to uncover DNA evidence of a resilience gene or genes in prodigies.

Trying to learn about a disease by studying people who don’t have it is not a new thing in science, Ruthsatz said.

In the book, the authors discuss how HIV researchers learned a lot by studying people who should have had HIV, but didn’t. These scientists found a genetic mutation that doesn’t allow for receptor sites to form on immune cells that are killed by the virus. For the lucky people with this mutation, HIV literally washes right through their body.

“The people with this mutation are the prodigies of the HIV world; researchers studied them so they could help their ‘cousins’ who contracted HIV,” she said.

With their genetic link, it is not surprising that prodigies and people with autism have much in common. Prodigies have autistic characteristics, such as extraordinary attention to detail and a tendency toward obsession.

These similarities may point to new ways to think about autism, and ways to help some of the children who have it, she said.

One promising avenue involves what is called “training the talent.” When parents of prodigies realize that their child has an extraordinary talent in art or math or astronomy, they understandably try to nurture that talent, even if it seems to border on obsession.

Children with autism also often have obsessions with particular subjects or talents. But because of their troubles communicating and showing emotions, parents often don’t let them follow these obsessions.

Ruthsatz has uncovered a few instances, however, where parents have let their children with autism pursue their passions.

“Instead of focusing entirely on trying to teach the children to speak or to make eye contact, the parents let their child do the thing they love to do, whatever that is,” she said.

“In some cases, the children get excited about their particular talent, they get good at it, and they want to communicate about it. The speech and communication and social skills come along with their growing ability.”

This is treating children with autism as if they were prodigies by focusing on their strengths and ignoring the deficits, she said. In some cases, those deficits become less pronounced as they follow their talents.

Ruthsatz cautioned that this approach doesn’t work with all children with autism and has not been scientifically tested yet.

It is unlikely that any one treatment will help all children with autism because the condition seems to be a set of related but distinct disorders.

“Trying to find a treatment that works for everyone based solely on similarity of symptoms is like trying to treat all people who have trouble breathing by giving them a Heimlich: It will help those who are choking, but it’s probably not the best answer for a person having an allergic reaction,” Ruthsatz and Stephens write in the book.

While the search for treatments continues, Ruthsatz said there is still much more to learn from prodigies.

“We’re really just at the beginning of this research. I’m excited about what we will be discovering in the future.”