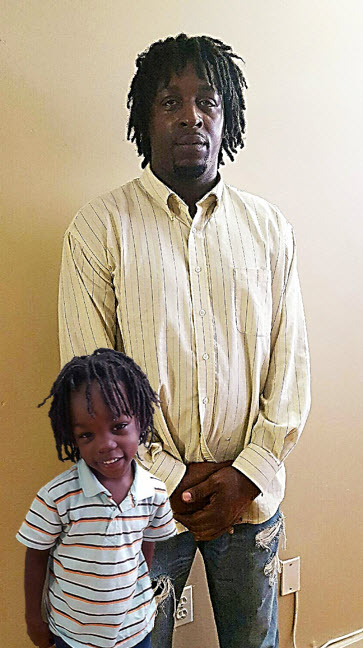 Jaime grew up in Georgetown, SC with his maternal grandmother who adopted him after his parents, who were both battling addictions were no longer able to care for him. After graduating from high school he enlisted in the United States Army. Shortly after being honorably discharged he became a young father to a son who is now 16 years old and later had a daughter. For several months he used marijuana and for a short time used cocaine–both as coping mechanisms.

When his biological mother became ill he moved back to South Carolina to care for her. While there, he became father to another son, Jaidyn (pictured), who was left in his custody at 8 months old. He decided to move back to New York to get a fresh start with his infant son. But due to lack of support and services, he and Jaidyn became homeless and entered into the shelter system.

This was a turning point for Jaime who finally began to address the mental health issues that plagued him. He was linked to a mental health provider where he is currently being treated for PTSD, manic depression and anxiety.

And S:US’ housing has provided the stability that Jaime and 3-year old Jaidyn need so that they can become a healthy and functional family unit. His goal is to become a better father to not only Jaidyn but to all his children. He also plans to re-enter the workforce in the field of social services where he has many years of experience.

Jamie remarked, “I would like to acknowledge S:US for their continued support on this journey from my stay in the shelter to my transition to an independent living apartment.” He added, “A very special thank you to the staff at the Veterans program.”