Serving Those Who Served 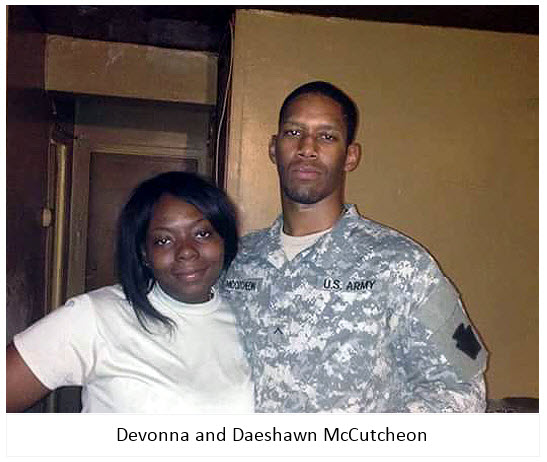 How many ways can we honor the willingness of our veterans to sacrifice themselves for others?

In January 2016 we announced that S:US had helped fulfill Mayor de Blasio’s mandate to end chronic homelessness in New York City. While this is a great achievement S:US needs to help the many veterans who are still experiencing short-term homelessness.  Until recently veterans Devonna and Daeshawn McCutcheon were one such couple.

The young couple met while serving in the Army and now have an 11-month-old daughter, Adanna.  Daeshawn served for more than a year in the Army National Guard before transitioning to Active Army duty in 2013.  Then, just one week after getting married, Daeshawn had to part from his bride to serve for nearly two years in South Korea close to the dangerous demilitarized zone between North and South Korea.  While stationed in Korea, Daeshawn experienced not only the deep trauma of being separated from Devonna, but also psychological stress when his unit was repeatedly placed on heightened alert as tensions arose between North and South Korea.

By the time Daeshawn returned to his mother’s home to be with his family, he discovered that Mom needed to downsize her living situation which meant the young family had to move out. With no place to go, they had no choice but to move into a shelter, and approached S:US for help.

While S:US actively sought appropriate housing for the young family, Daeshawn began working two part-time jobs in Long Island, NY:  one was with the Boys & Girl Club and the other with Island Harvest (food bank) delivering food to veterans through a program called Operation Hope. S:US is pleased to announce that on February 3, 2016 Daeshawn was promoted to a fulltime position at Island Harvest as Supervisor of both their Mobile Food Pantry and Operation Hope programs. He has come a long way since the day he returned from service overseas with just $10 in his pocket.

We already knew that this young family was hoping to have a place of their own.  When we asked Devonna what was on her wishlist for Christmas she was happily surprised by the question and responded, “I don’t know. No one has asked me what I wanted for Christmas since I was a kid.”  She thought for a moment and then added, “I’d really like a nice Bible with a cover on it.” When asked what she would like for the baby, she said, “a highchair and a crib.”

Little did she or Daeshawn realize that their wishes were about to come true when just one day before Christmas, they received the keys to move into an apartment.

“That was amazing!” exclaimed Daeshawn.  “It was like a sense of relief and overwhelming happiness because of all the things that we had to go through we finally get to move somewhere we can live instead of just a shelter and this definitely put the icing on the experience that our family needed to function at a normal level.”

Devonna added, “If we hadn’t found S:US’ Supportive Services for Veteran Families I don’t know what kind of shape my family would be in today. They have been a blessing—helping us with food and the job search and gong to the moon and back for us.”

But the good news didn’t stop there: the day S:US Veterans Services Staff in Long Island handed the McCutcheons their own keys, they also gave the young couple the highchair and crib for baby Adanna.  And when American Bible Society heard about the couple’s service to their country and homeless situation, they were moved to donate two military-cover pocket Bibles, one each for Devonna and Daeshawn.  The couple was extremely grateful for all the gifts, and with tears in their eyes thanked S:US. Daeshawn later remarked, “I couldn’t have handpicked those gifts better myself!” He went on to say, “We haven’t had Bibles that we can read together for a while. A family that prays together, definitely stays together!”

With S:US’ support and their determination, this young veteran family now have a place to call home and can afford to look ahead to longer-term goals. Daeshawn disclosed, “We definitely want to become financially stable and get to a point where we own our own home.”

While the McCutcheon family story has a happy ending, they are just one of thousands of Veteran families in New York City who are in dire need of housing and employment. S:US is one of the largest veterans service providers in the greater New York City area serving close to 3,000 veterans and their families through permanent housing, rapid rehousing and long and short-term social services. Ninety percent of the veterans we serve are homeless, seventy percent live with co-occurring chronic mental illness, substance use disorders, and/or serious health conditions, forty percent have a history of involvement with the criminal justice system, while nearly all qualify as “very low income” per federal guidelines.  Approximately twenty-five percent of the veterans we work with have served in the Iraq and Afghanistan conflicts.  S:US Veterans Services actively targets those veterans at highest risk for death due to the effects of homelessness, unemployment, untreated medical, psychiatric and substance use disorders as well as disconnection from family, social and other natural supports.