Wall Street Journal: This Lego House You Can Live In 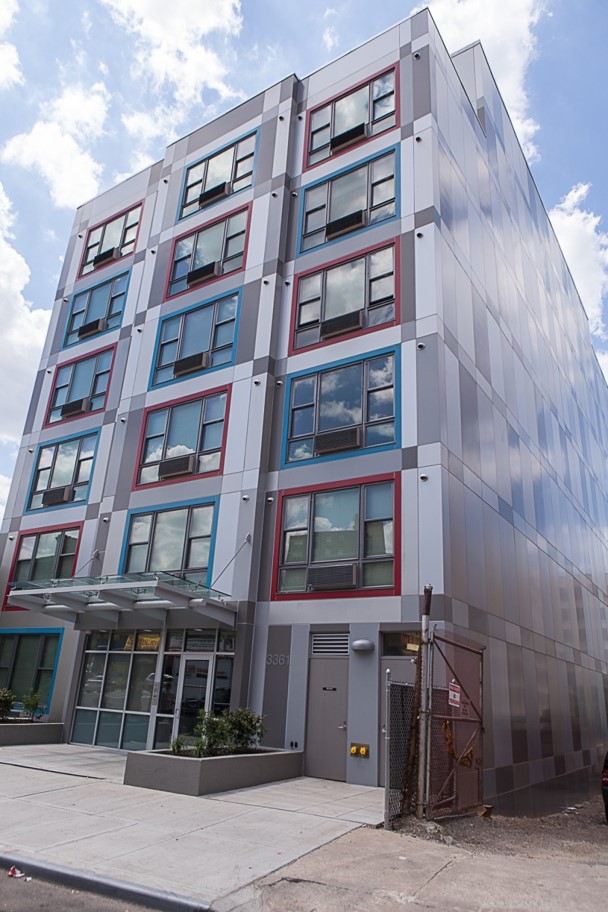 A modular building in the Bronx houses 62 people, some formerly homeless

When Bronx residents watched a 300-foot crane lower 90,000-pound blue- and red-accented modules onto a former used-car lot, the construction process reminded them of a familiar childhood toy.

So the locals dubbed it the Lego Building.

The seven-story residential building at 3361 Third Ave. was built using modular construction: Its 51 pieces were made in a Brooklyn factory, then assembled on the building site. It now houses 62 low-income tenants. Thirty-eight of these are formerly homeless and live in so-called supportive housing, which integrates social services for them.

“One of the challenges for our folks is many have been institutionalized for much of their lives,” said Ed Slepin, a regional director at Services for the UnderServed, the nonprofit that provides the building’s social services. But 3361 Third Ave., with its thoughtful architecture and art-covered walls, feels like a home. “This building is contrary to that,” he added.

For the developers of the $22 million project, the modular approach made sense because the building comprises studio apartments that are all about the same size, said Samantha Magistro, managing director of Bronx Pro Group, which developed the site with Services for the UnderServed and Strategic Construction & Development Group.

The developers bought the building site in 2012 and completed the project in summer 2015. By the end of 2015, all tenants had moved in.

Modular manufacturing company Capsys Corp built the units, typically 42 by 17½ feet, at the Brooklyn Navy Yard. Most contained two apartments and were the heaviest modules the firm had ever made. The building was erected in three weeks, said Tom O’Hara, the company’s former vice president for business development.

Working with modules can be difficult because of the precision that it requires, said architect James McCullar. “It’s very much like any Lego set,” Mr. McCullar said. “It only goes together in certain ways.”

But that precision leads to a kind of discipline of design, he added.

The facade is covered with aluminum composite panels, which are about a quarter inch thick and attached through a clip system that links to the insulation.

“The panel system gave us a chance to play with the colors,” Mr. McCullar said.

On the side of the building outside are panels in four shades of gray: bright silver, champagne, dove gray and slate gray. The panels are meant to give the wall a soft and playful feeling, Mr. McCullar said. “It’s almost like an Armani fabric.”

Throughout the exterior, the 7- by 9-foot windows are framed in alternating red and blue. The window frames are made of fiberglass because it is more energy-efficient, Mr. McCullar said.

Inside the building, the floor tiles are also mixed shades of gray, meant to mimic the exterior design of the panels. The interior doorways are framed in red and blue, just like the facade’s windows.

Inside one red-framed doorway lives Michael Byrne, who moved into a supportive housing unit about three months ago. Mr. Byrne, 52 years old, was an excavator who worked in tunnels.

After working in and around the World Trade Center site after the Sept. 11, 2001, terror attacks, he said he developed lung problems and post-traumatic stress disorder and spent 10 years living on the street.

“It’s giving me a chance to get my life back,” said Mr. Byrne, who is originally from the Bronx. “I can put a key in the door and I’m home again.”