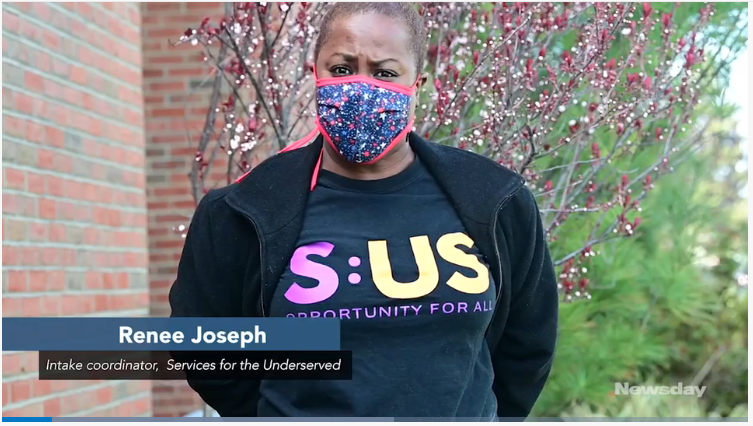 Renee Joseph spent years couch surfing, living in her Nissan Versa and bouncing around between homeless shelters for female veterans.

Joseph, 45, of Wyandanch, a former captain with the U.S. Marines who graduated college with a bachelor’s degree in political science, struggled for about eight years after leaving the military before landing on her feet with the help of a nonprofit.

Now, Joseph, who said “really bad financial decisions” eventually left her homeless, works as the intake coordinator for Manhattan-based Services for the UnderServed, which hired her in 2018. In her job she speaks to veterans who are down on their luck. Joseph evaluates if the organization can help veterans with services such as securing housing, qualifying for benefits and job hunting.

“You have to encourage them. I remember when others were encouraging me when I was in their shoes,” Joseph said Thursday night. “Homelessness, no matter what the situation, is one of those things you never forget.”

Joseph and other staffers with the company fanned out Thursday to feed veterans and other Long Islanders who were once homeless, she said.

Beth Gabellini, regional director for the organization’s Veteran’s Division of Long Island, says while everyone is struggling during the COVID-19 pandemic, veterans are being hit hard with challenges such as high unemployment.

“We’ve seen a lot of veterans living in their cars. Veterans are having a particularly tough time,” she said. “There’s a lack of work, clearly, … connecting to benefits has been more difficult.”

“I lost my job about 28 days ago, and we became a nonprofit … about seven days ago,” said Ryan Carroll with the organization. “I have a staff of about 40 employees. I hire out-of -work chefs and put them back to work.”

“Everyone was extremely grateful. The look on their faces when we got back in the car and they would pick up the delivery. We got a lot of waves and ‘thank yous.'”

Joseph says social distancing and quarantining prompted by the coronavirus has forced her to adjust how she does her job because she enjoys face-to-face communication.

Although she hates to see people struggle, Joseph said the pandemic might spawn empathy because people were thrown into unexpected hardships.

“Nobody planned to be unemployed or homeless because of COVID-19. Situations happen that are beyond our control,” Joseph said.

Read the original article and watch the interview here.

For information on how S:US is helping thousands of New Yorkers during the pandemic, please visit https://sus.org/sus-helps-thousands-of-new-yorkers-during-covid-19-crisis/.