On a warm afternoon during the week preceding Memorial Day, S:US celebrated the holiday with a memorial service in the gardens of our Knickerbocker veterans residence in Brooklyn.  In attendance were veterans served by S:US as well as staff of S:US who have served in the military. 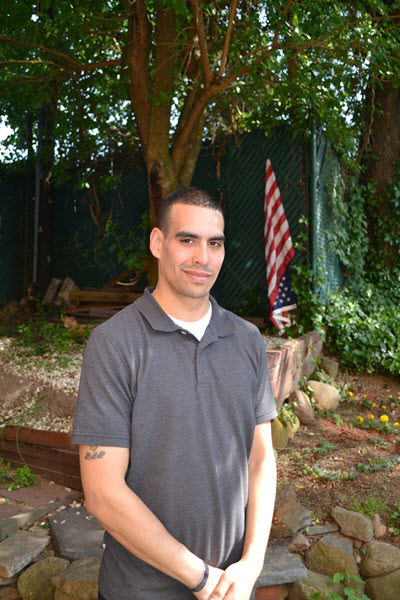 Before the service began, Sergeant Jason Nuñez (pictured right) spoke about his military service and what Memorial Day means to him.

When Jason was 20 years old he joined the Marines with a keen interest in taking on a combative role.  Upon completing his training, Jason spent nine months in Afghanistan mentoring local police on how to carry out law enforcement. He then spent some time in Iraq helping to protect US engineers as they pulled out of the country.  Most recently he was stationed in South Korea teaching the local soldiers U.S. military tactics.

Jason is now in the Marine Corps Reserves and has been working with S:US’ Veterans Services division since November 2014 as a Quality Control Specialist.

When asked what Memorial Day means to him, he responded, “We recognize the sacrifice of others who have gone before us. We stand upon their shoulders, on the broken appendages that these veterans gave up for us.  I personally know people who gave the ultimate sacrifice for us, without which I wouldn’t be alive today.” 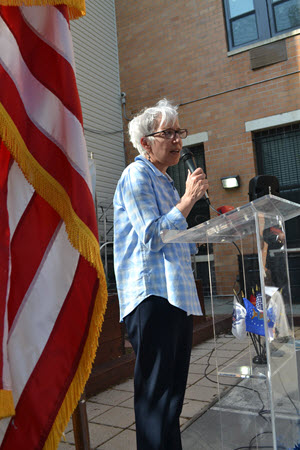 The Memorial Day service began with S:US CEO Donna Colonna (pictured right) addressing the assembly, “I want to thank the tenants of Knickerbocker for hosting Memorial Day honoring the men and women who have died for our freedom in our country.  I also want to thank all the veterans that are here for their service.  Too often we see Memorial Day as just a holiday, but not at S:US.  Not only is the work that we do with veterans important, but we want to make sure we never forget those who fought for us, and we want to value the fact that we have that freedom because there are men and women who are willing to put themselves in harm’s way for us.” 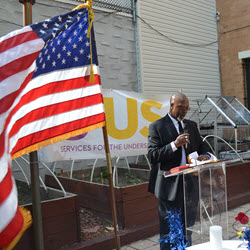 Joshua Alcide, Housing Service Coordinator for our Supportive Services for Veteran Families program, led in the singing of the national anthem which was immediately followed by US Army Veteran Sergeant Stephan Hall (pictured right) giving the benediction.  Stephan recently became a chaplain and is S:US’ Veterans Outreach Coordinator.

Next to speak was one of the residents of Knickerbocker, Sergeant Walter Balduccini (pictured right) who served four years active duty in Vietnam. 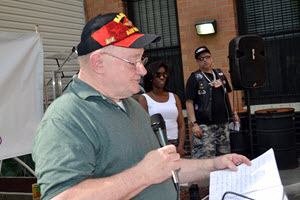 “As a boy Memorial Day was about cookouts, parties and going to the beach.  Now as an adult and a Marine combat veteran this is the holiday I use to remember lost comrades, our times and tribulations together and what it would have been like if they too were able to return home.  We can have our cookouts, our parties and our parades, but let us never forget the ones who never came back for their burgers and beers.” 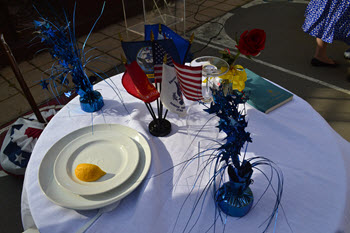 Finally, it was Jason’s turn to speak.  He explained the significance of the “Fallen Warrior” table (see right).  The empty chair and the symbolic items on the table represent soldiers who never made it back home because they fell as prisoners of war, are missing or killed in action.  It was a poignant moment when he read a list of 14 veterans served by S:US who have died over the past year.  Everyone observed a minute of silence to honor their memory. 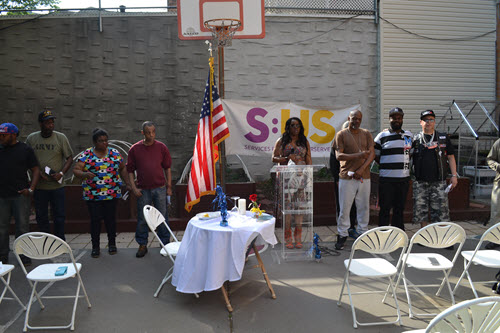 Before the service ended each veteran received a pin from Tec. Sergeant Robin Smith in recognition of their service to the country.  Robin (pictured above, center) is a 17-year veteran of the  Air Force and Army National Guard, and works as Case Operations Manager of S:US Veterans Services division.

Click here to see more photos of this event